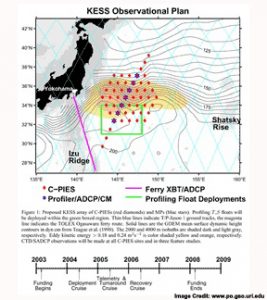 Understanding the processes that govern the variability of and the interaction between the Kuroshio Extension and the recirculation gyre is the goal of this study. Processes coupling the baroclinic and barotropic circulations will be examined by case studies of the local dynamical balances, particularly during strong meandering events. The mechanisms by which water masses are exchanged and modified as they cross the front will be characterized. The objective is to determine the processes governing the strength and structure of the recirculation gyres in relation to the meandering jet.

KESS cruises included data from a hull-mounted Acoustic Doppler Current Profiler (SADCP), which measured the velocity of the upper-ocean currents below the ship.