KESS motivates us to examine various theoretical questions with the unique opportunity to use highly idealized theoretical models together with direct observations of the actual system we are attempting to idealize and better understand. This pairing helps us improve both our theoretical study by getting instruction from the observations on how to design the simplified models to make them relevant to the real oceanic system, while also improving our observational study by providing a dynamical framework to help guide and interpret the (much more limited and complicated) observations, thereby extending our understanding of the underlying physics that we can derive from them. Together they can provide an awareness of the successes and failings of our theoretical understanding in capturing the essential physics of the real oceanic system. 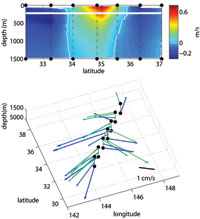 One such theoretical question being addressed by KESS relates to the nature and the importance of eddy-mean flow interactions in western boundary current (WBC) jet systems like the Kuroshio and the Gulf Stream. Eddy energies are orders of magnitude larger along the mean paths of these jets compared to most other regions of the ocean, and as such we expect eddy variability to potentially play an important role in the dynamics of these systems. Through their fluxes of momentum and vorticity, eddies can be important in determining the character of the mean flow, not only as a source of dissipation but also as a driving force through nonlinear eddy-eddy and eddy-mean flow interactions. In particular we expect eddies to play important roles in altering the mean jet’s strength, structure and stability, driving the flanking recirculations and abyssal motions, and potentially modulating low-frequency variability observed in these systems.

To better understand the role of eddy-mean flow interactions in the Kuroshio we have studied the role of eddy-mean flow interactions in the dynamics of a baroclinic, unstable boundary-forced jet in an idealized QG numerical model. We find that in this idealized configuration in a parameter regime relevant to the Kuroshio Extension and the Gulf Stream, eddy fluxes play important roles in both stabilizing the jet as it evolves downstream and driving recirculations through the mechanism of an up-gradient PV flux that occurs downstream of jet stabilization. We also find that the properties of the eddy-driven time-mean circulation (the strength of the time-mean jet and the strength and extent of the time-mean recirculations) can be predicted given the stability properties of the upstream jet that was the source of the eddy variability. These results support the hypothesis that the observed recirculations in the Gulf Stream and Kuroshio Extension may be, at least partially, eddy-driven, and provide insight into what may determine the properties of the observed mean jet and its recirculations as it evolves downstream. 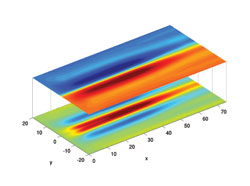 We next test the relevance of these idealized results to the actual oceanic WBC jet systems through analysis of the KESS observations along-side analysis of the output of the 1/10th of a degree resolution Parallel Ocean Program (POP) GCM model in the Kuroshio region. The model’s high resolution in space and time over an extended period and area provides an opportunity to extend our understanding of the dynamics in a realistic regime beyond that which can be gained from the analysis of observations alone. Work in this direction in on-going, but initial results suggest both that the simplifications of the idealized model are appropriate to the observed oceanic system, and that the observations have several dynamically significant signatures in common with the theoretical predictions. This leads us to believe the simplified physics we have studied in our theoretical investigations are a useful way to try to understand the role of eddy-mean flow interactions in the Kuroshio and potentially other WBC jet systems.