Shown below is the KESS CPIES/PIES array superimposed on Smith and Sandwell bathymetry contoured every 1000 m. The CPIES/PIES were moored in water depths ranging from 5300 m on the western side of the array to 6300 m in the east. Data is available for 46 sites. Site designator is given in the upper left hand corner and IES serial number is listed under the triangles. Black is for CPIES sites, red for PIES sites, magenta specifies sites where only telemetry was taken, and yellow designates where instruments were CPIES in 2005, but PIES in 2006. The measurements were made during April 2004 to July 2006 under the sponsorship of the National Science Foundation. The measured quantities include pressure, vertical acoustic round-trip travel time, and currents. All data files in the CPIES archive are provided in ASCII format. 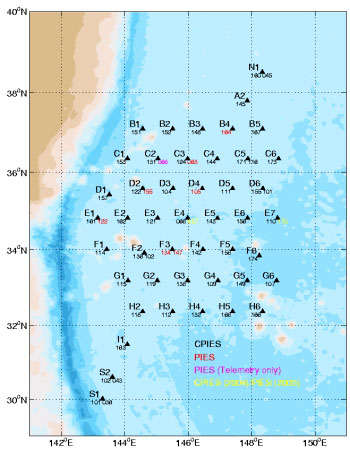 There are up to three files for each instrument, where XX is the site designator and YYY is the IES serial number:

These are the highest quality versions of the data after the least amount of processing. Large data spikes (outliers) and long term drifts have been removed from these records. Details of the processing are provided in the data report. Each file contains year, month, day, hour, minute, second and either pressure, travel time or currents. Missing data values are indicated by NaN.

There are up to three files for each instrument, where XX is the site designator:

The above pressure, travel time and current records were lowpass filtered using a 4th order Butterworth filter with a 72 hr cutoff period. Further details are provided in the data report. These pressures have been leveled to a common geopotentail using mean currents. The travel times have been referenced to a common pressure level. These values are equivalent to the integral of sound speed between the surface and 1400 dbar times two (ie., round-trip). Each file contains year, month, day, hour, minute, second, and either pressure, travel time or currents.

The CTD directory contains files from the deployment (2004), telemetry (2005) and recovery (2006) cruises. Each file contains pressure, temperature and salinity. Data are provided in either ASCII, netCDF, or csv format.