Numerical simulations offer a unique look at the time and space variability of the North Pacific Subtropical Mode Water (STMW). 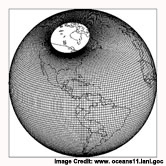 The Parallel Ocean Program (POP) is a three-dimensional, z-level, primitive equation general circulation ocean model with an implicit free surface. The model has 1/10° horizontal spacing at the equator, employs a displaced pole grid in the Northern Hemisphere to allow the inclusion of the Arctic Ocean, and uses 40 vertical levels. It includes a K-Profile Parameterization (KPP) mixed layer. Details of the model formulation can be found at http://climate.lanl.gov/Models/POP/.

One goal of the present study is to focus on an important physical process, namely the formation and erosion of STMW, to understand how the model performs: in what ways it is successful and where it fails. The model also allows us to calculate the potential vorticity (PV) budget of the density layer containing the STMW.

The 1/32° global NLOM nowcast/forecast system became operational on 6 Mar 2006 as an upgrade to the 1/16° global NLOM system that ran operationally at NAVOCEANO from 27 Sep 2001 – 5 Mar 2006. Overall, the 1/16° NLOM ran in real-time 18 Oct 2000 – 11 Mar 2006 and was discontinued 12 Mar 2006 and the 1/32° NLOM has been running in real time or near real time since 1 Nov 2003. The model presently is assimilating SSH from 3 satellite altimeters (ENVISAT, GFO and JASON-1) and sea surface temperature from satellite IR imagery. Altimeter track data over a 3-day window are assimilated each day. Nowcasts are run daily and 30-day forecasts are presently run once per week.

The 1/32° global NLOM nowcast/forecast system was used during the cruises to locate the Kuroshio Extension.