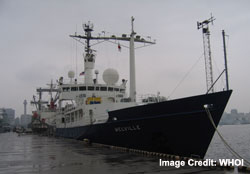 The SADCP (shipboard acoustic Doppler current profiler) surveys were conducted on all six cruises within 140°E to 150°E and 30°N to 39°N. The coverage varies from cruise to cruise, data was collected between moorings and CTD deployments. The SADCP is a hull-mounted ADCP which measures the velocity of the upper-ocean currents below the ship. When used in conjunction with the ship’s heading and navigation data, absolute currents in the upper ocean can be determined.

The ADCP works by transmitting “pings” of sound at a constant frequency into the water. As the sound waves travel, they ricochet off particles suspended in the moving water, and reflect back to the instrument. Due to the Doppler effect, sound waves that bounce back from a particle moving away from the profiler have a slightly lowered frequency when they return. Particles moving toward the instrument send back higher frequency waves. The difference in frequency between the waves the profiler sends out and the waves it receives is called the Doppler shift. The instrument uses this shift to calculate how fast the particle and the water around it are moving.

The basic processing of the ADCP data involves removing pitch, roll, and heading variations from the velocity data; correcting for the speed of sound; subtracting the ship’s velocity from the data; and finally averaging the data in space or time.