Intrusions and their associated mixing processes play an important role not only in the lateral transport of heat and salt across the Kuroshio Extension (KE) but also in setting the downstream properties of North Pacific Intermediate Water (NPIW). Feature surveys using deep reaching (750 m) ADCP and rapid CTDs to 1200 m were conducted during each year of the KESS field program to examine cross frontal exchange. Highlighted here are results from the May 2004 feature survey which sampled a weak meander trough during a stable KE period.

Horizontal resolution resolved the structure both across and along the KE. The May 2004 survey consisted of 58 CTD casts in four transects (a-d, see maps below) separated by about 30 km along stream and 15 km across stream. Shown below are potential temperature (left, ° C) and salinity (right, psu) sections contoured against depth and latitude for the four transects. Sections are displayed in a west to east order with a at the top and dat the bottom. Dashed and solid vertical lines superimposed on the temperature and salinity contour plots are dynamic height values at 100 m referenced to 1000 m in dynamic meters. Sea surface height contours are shown in color on the maps. 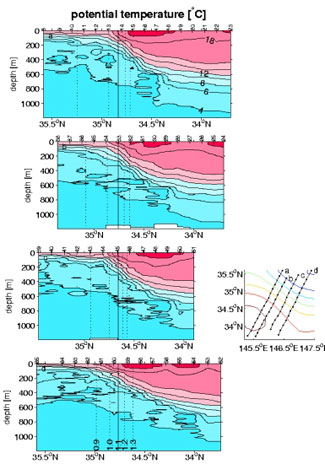 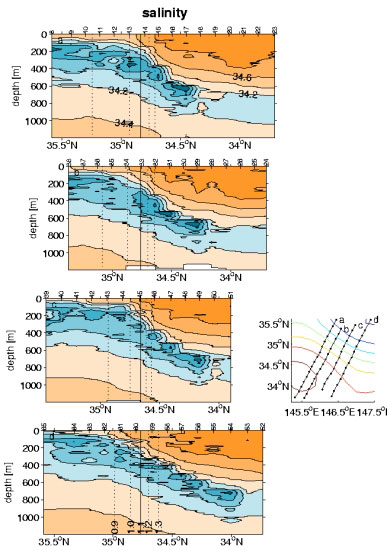 Interleaving with vertical scales between 50 and 100 m existed within the NPIW layer. Turner angles suggest the presence of double diffusive processes within this layer. Intrusions rose relative to horizontal surfaces toward the cold-fresh side of the front and sloped downward relative to isopycnals toward the cold-fresh side. Interpretation of these slopes within linear instability theory indicates that salt fingering fluxes dominated over diffusive convective fluxes during the growth stage. Intrusion slopes fall within the baroclinic wedge of instability indicating that the background density field likely provided additional forcing of the intrusion development. During this stable period the horizontal intrusion scales were nominally 12 km and intrusions could be tracked across the KE core.